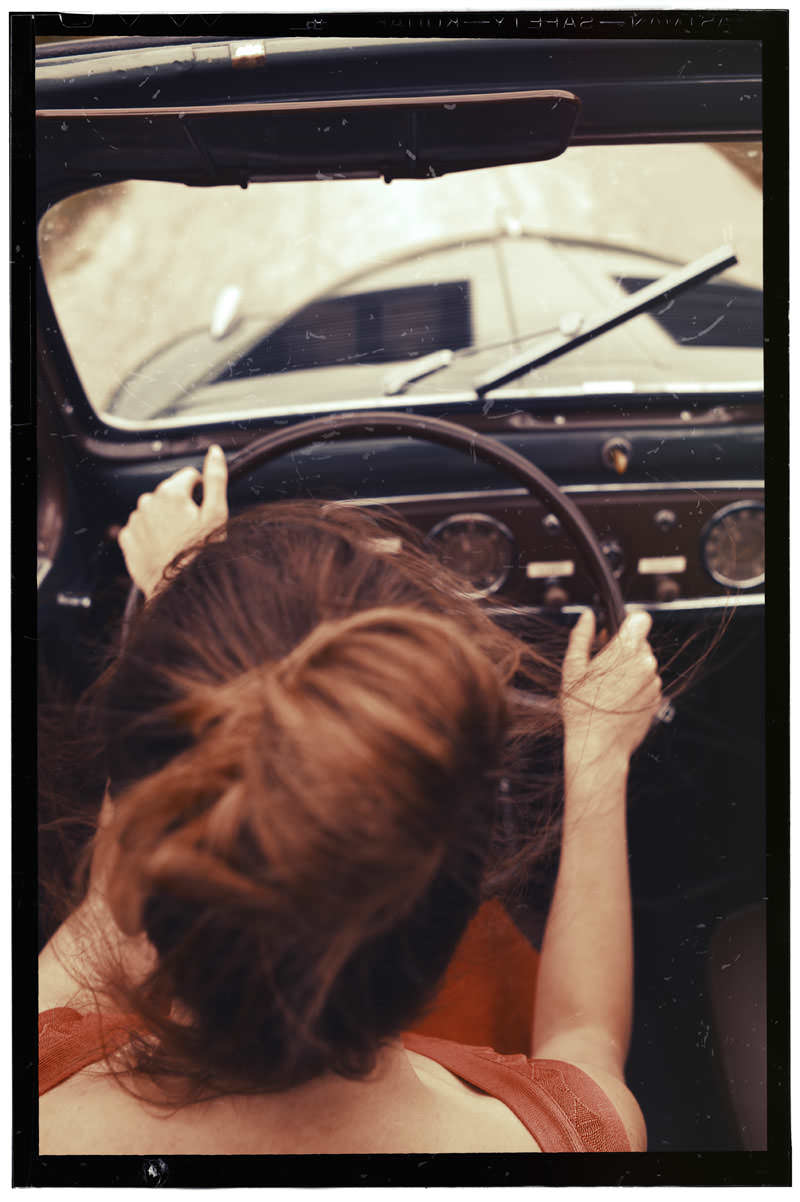 In the midday heat of any yellowish June's summer day, back in 1948. Driving west, then south, in search of the old highways. All of a sudden I was out of the lot and on the turnpike next to the mountains, flying. I put my hand out the window, and then I put my head out; a million smells along this road, both old and just born. I felt my hair blow behind me and the air rush into me, and I forgot for a moment to worry about how I was supposed to be. The roadway seems to stretch for miles in a straight line as the fields and farms give way to a more barren landscape. All that space, waiting, so easy to go sailing off this road. It was like hundreds of roads I had driven over, no different, a stretch of tar, lusterless, dusty, pitted. The broken center line of the road reflected itself in the windscreen and became an endless pulsing ribbon. A town or village straddling the highway; street signs peer out here and there among the trees. On both sides were telephone poles, tilted this way and that, up a little, down, threaded together by wires. I counted one, two, three ... one hundred and nineteen telephone poles. Along them I drove like a drunken butterfly heading to its next fermented flower. The indicator on the speedometer started to lose ground and I was miles away from my real life. Driving is a spectacular form of amnesia, everything is to be discovered, everything to be obliterated. 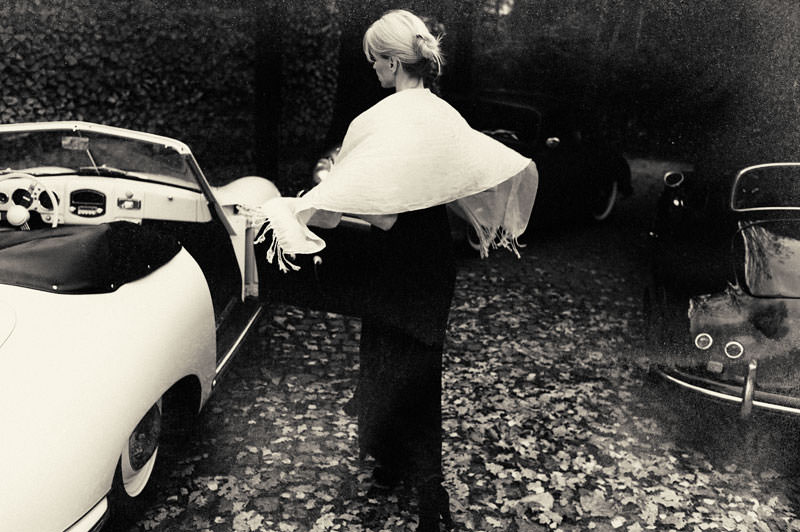 The air is heavy this evening, thicker than usual for this time of year. We expect a hint of crispness when leaves start falling like the wind's telling us secrets about days to come. But all I feel is muggy. She's projecting again, despite my chagrin. How I'd give anything to go back in her history, to solve the mystery. What fool could have played so loosely with a hand like this? And now I follow behind, ready to pick up the pieces should any break free. My only purpose, to save her from another carbon copy scene. I'll know it's time when I see the chill set in, when social graces raise goose bumps on her ivory skin. That scarf, the white one, she wears it like armor when forced to do battle on the fields of society. I watch as it slips lower and lower. A glimpse of her shoulder reminds me of the delicate flower that lies beneath. Despite the hard edge she's attempting to display, I see only soft curves and her womanly ways. I know in mere moments, we'll be on the open road. I'll reach to her hair and let it flow, the pardoned cascade setting her free and just like that, she'll be back with me. ~ Francesca 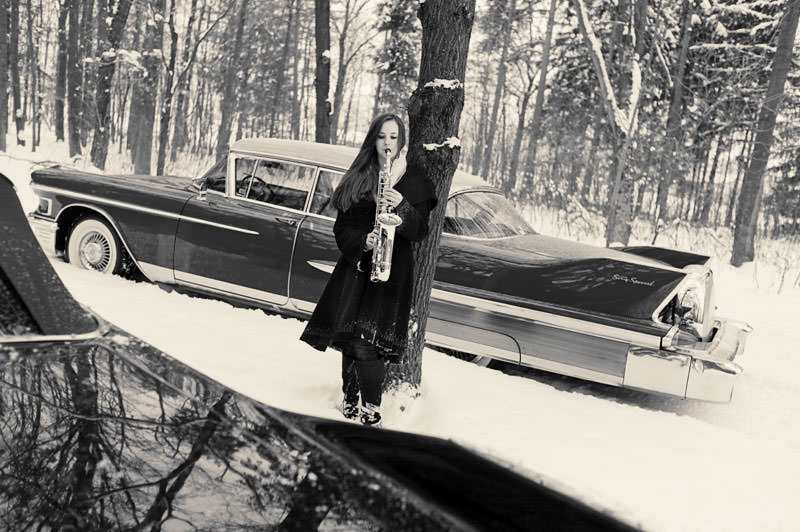 Detroit's mummified sculptures, frozen behind my back. A vision of human industrial empire keeps passing before my eyes. In my ears, I hear the wonderful symphony which came from factories where metals were shaped into tools for men's service. Motown Blues, a new music, waiting for the composer with genius enough to give it communicable form. I think of the millions of different men by whose combined labor and thought automobiles were produced, from the miners who dug the iron ore out of the earth to the railroad men who brought the finished machines to the consumer, so that man, space, and time might be conquered, and ever-expanding victories be won against death. Machinery for its own sake and for its meaning to man, his self-fulfillment, and liberation from drudgery and poverty. Detroit's motor-cars were the ultimate symbols of those American dreams - the reward for travelers towards luxurious existence. But we lost it all; wealth and beauty are buried deeply under this coating golden cold. I have memories, but the images have lost their vividness, they seem dead and desultory. Nothing but glimpses of faded past that Miss Liberty tries to mask by slipping into the photograph's sepia. Yet the city is not dead; but no human is there any longer to charge or discharge. After a long exile, wild animals came back to occupy the territory wrested from the forest. Foxes and martens wave their soft tails over the control panels starred with manometers and levers and gauges and diagrams; badgers and dormice luxuriate on batteries and magnetos. 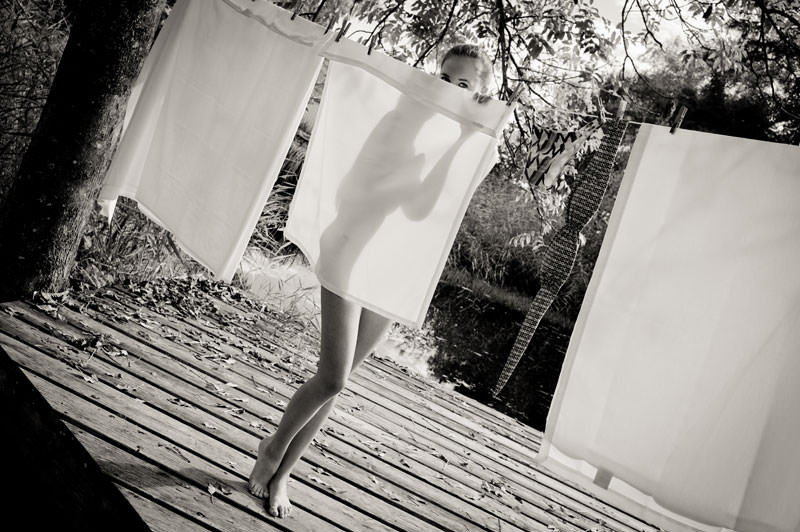 The land and the water make numbers joined, through the endless night the earth whirls toward a creation unknown; a poem written in flesh and stronger than steel or granite. For years I went about, day and night, with only one thing on my mind. Her! She rises up out of a pond of faces and embraces me, embraces me passionately. I could see only eyes shining through; eyes so big and bright, as if they saw more than they could comprehend. One can wait a whole lifetime for a moment like this. The woman whom you never hoped to meet now stands before you and she looks exactly like the person you dreamed about. But the strangest of all is that you never realized before that you had dreamed about her. I sit down beside her and she talks. I hear not a word because she is beautiful and I love her and now I am happy and willing to die, but she even wouldn't remember that at a certain corner I had stopped to pick up her hairpin, or that, when I bent down to tie her laces, I remarked the spot on which her foot had rested and that it would remain there in Perpetuum, even after the cathedrals had been demolished and the whole Latin civilization wiped out forever and ever. I loved. And I lost. 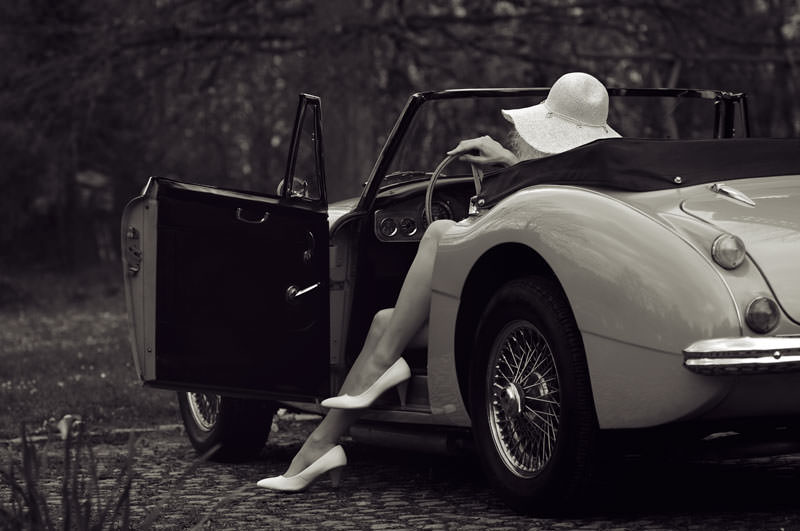 Road's End | No Motorized Girls Beyond This Point

Man really loves nothing but his automobile; not his wife his child nor his country nor even his bank-account first but his motor-car. The automobile has become a national sex symbol. We cannot really enjoy anything unless we can go up an alley for it. Yet our whole background and raising and training forbid the sub rosa and surreptitious. So we have to divorce our wife today in order to remove from our mistress the odium of mistress in order to divorce our wife tomorrow in order to remove from our mistress and so on. As a result of which the woman has become cold and undersexed; she has projected her libido on to the automobile. So in order to capture and master anything at all of her anymore the man has got to make that car his own. Which is why let him live in a rented rat hole though he must he will not only own one but renew it each year in pristine virginity, lending it to no one, letting no other hand ever know the last secret forever chaste forever wanton intimacy of its pedals and levers, having nowhere to go in it himself and even if he did he would not go where scratch or blemish might deface it, spending all Sunday morning washing and polishing and waxing it because in doing that he is caressing the body of the woman who has long since now denied him her bed. 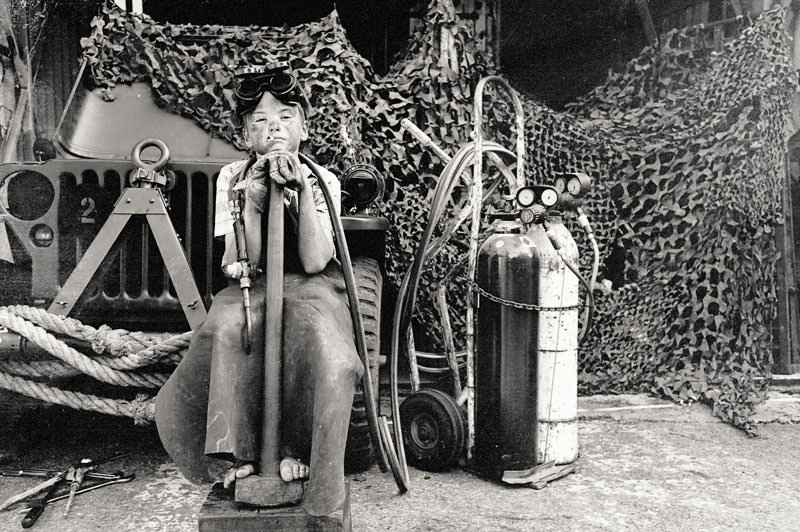 He's like a hero come back from the war, a poor maimed bastard living out the reality of his dreams. Those whom society rejects, under the pretext that they may have no Gods, no Masters. Wherever he sits himself the chair collapses; whatever door he enters the room is empty; whatever he puts in his mouth leaves a bad taste. Everything is just the same as it was before; the elements are unchanged, the dream is no different than the reality. Only, between the time he went to sleep and the time he woke up, his body was stolen. We were young, and we had just begun to love the world and to love being in it, but we've been cut off from real action, from getting on, from progress. We are not youth any longer. We're no longer young men. We've lost any desire to conquer the world. We don't want to take the world by storm. We are refugees. We are fleeing from ourselves. From our lives. We are forlorn like children, and experienced like old men, we are crude and sorrowful and superficial. I believe we are lost. The cigarette we smoke at the democratic dawn; the dawn that puts a veil for tears that may have no Gods, no Masters. You take it from me, we are losing our freedom because we can salute too well. The word of the prophet, I claim it and I wish you no more Gods, no more Masters! 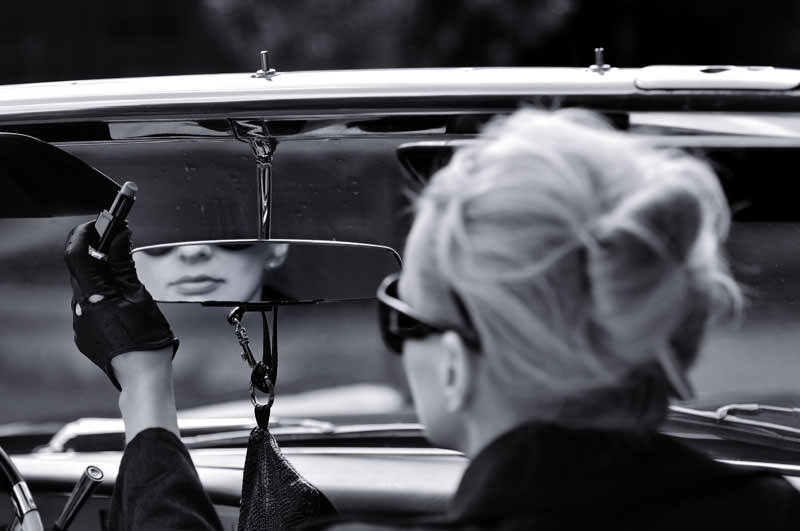 Film Noir | The World Is The Mirror Of Myself Dying

Three o'clock in the morning. The highway is empty under a malignant moon. Oil drippings make the roadway gleam like a blue-satin ribbon. The night is still but for the engine's humming noise. There is something unbearably sexy about cars at night. The way the fenders twist the light and reflect the road, the way every driver becomes anonymous. The road is straight, the way is long but the night is short. The humming burgeons into a roar. The car going so fast it sways from side to side. The inside of the old Lincoln smells like asphalt, gasoline and dreams and desire. The backseat produced the sexual revolution but all males chase women they have no intention of marrying for the same reason dogs chase cars they have no intention of driving. At that very special night, after the last picture show, my tears were not allowed to cry. A tramp on the night, driving my car along the country roads, I began to wonder how real the landscape truly was, and how much of a dream is a dream. It was then that the rain started. I loved the sensation of the water running over my body and, for an instant, I closed my eyes and forgot. The rain drenched my dress, but the deluge did nothing to dampen the mood of the night. I dreamed of driving off bridges, into the moonshine river, into the dried-up reservoir on the country road to home, into the lake beneath some twisting highway of my youth. 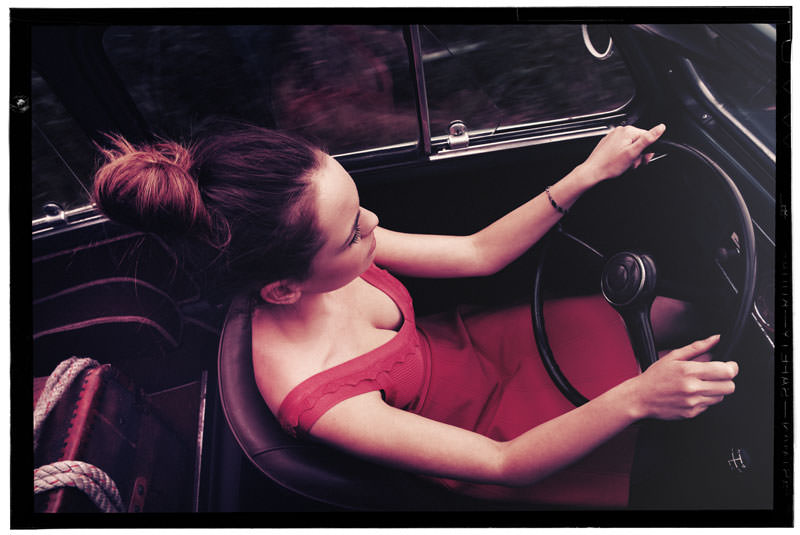 Cicciolina takes you on a journey of revenge, lust, and sacrifice. What many would see as a stunning young woman turns out to be a cunning vixen, rotten as an apple hung too long on the tree well into fall. Left by her father too early in life, the victim of men and their lecherous eyes, scarred from years of broken hearts and lies, our darling Cicciolina takes to the road. With her suitcase in tow she hunts, patiently, innocently - driven by a well-calculated plan. Taking a man's car, his heart, and much more to make peace with the pagan Gods who haunt her night after night. Every lover a lamb to the slaughter. The roles were reversed and the wolf now slayed. A quick flick of the wrist and the tables turn, she claims his heart, his soul to burn. Sadness and anger the fertilizer for her growing orchard of mistrust, deceit, and revenge. Revenge upon the entire species. The pedal to the metal, every mile adding to her intoxicating allure. In search of an oblation, a sacrificial lamb to cleanse her dark soul. If you have wheels that catch her eye and a selfish hunger that you can't disguise, be warned, you will be next to find the burn that comes from meeting her rope. The rope that bound it all, that kept her secrets wrapped up tight, was the one thing that onlookers could see but few could truly know just how special it really was. Much more than a rope, a trusted tool, a friend to the end. ~ Francesca