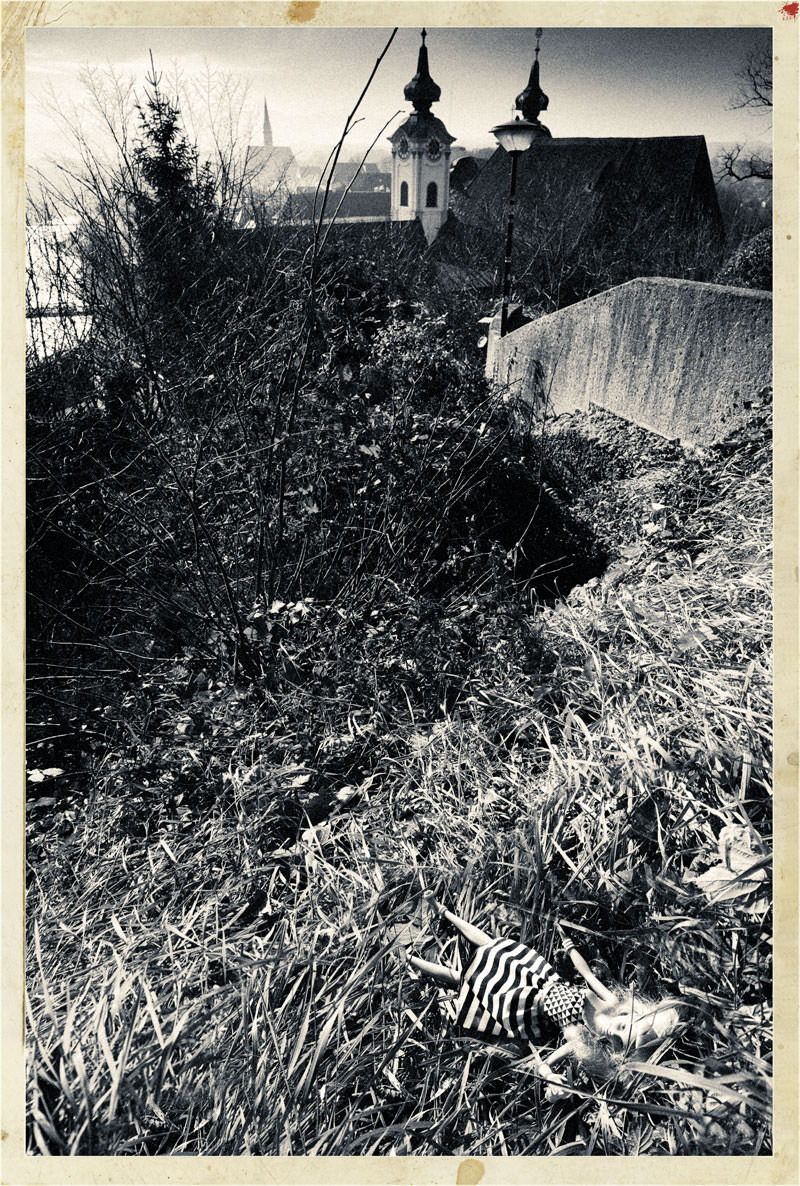 He does have an obsessive eye for beauty. Molded to his tastes she allows for the moment of elusive perfection, mirroring his darkest desires, to be captured precisely. It is the beauty of art, he thinks. To allow for feeling, or intuition to be expressed. The little limbs of perfection are positioned in just the right way easier now that the struggling has stopped. The textured silkiness of her hair fanned on the still damp grass, her carmine mouth his alone. He works with a passion radiating from his eyes and an insatiable hunger fueled by the moment. This is a beautiful location. It mirrors a town that does not tell its name or its past, thought the photographer seeking inspiration. That's when he noticed a beautiful little doll nestled in the grass. It sparked his eye, and he started capturing the image. A man's rapid, desperate voice is heard. The sound radiating from a soulless room, mirroring an ugly reality. The voice stems from a bruised and bloodied face. His expression desperate and with the look of murder in his eyes, he tells, bored from depersonalization, how it was his job to protect his younger sister. An entire wall in this place covered with the grainy photographs of missing persons, all but one or two, are beautiful, young women and girls. The police pin the latest one. She was a commodity. An asset. Her trafficker exists in a place where humanity is lost. She was desperate, used and abused in unimaginable ways and, she is not alone. My sister, says the man, was carrying a little doll. ~ Kalahari 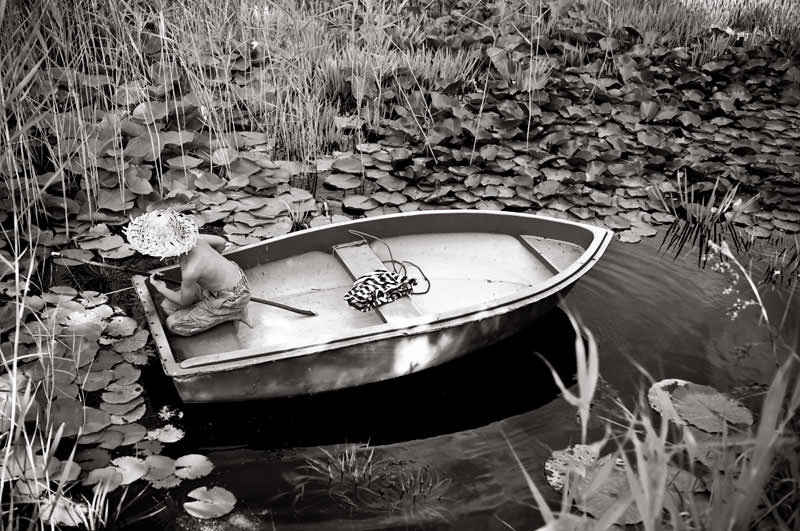 Sea Of Life | The Biggest Truths Are Few Indeed

Fishing provides time to think, and reason not to. If you have the virtue of patience, an hour or two of casting alone is plenty of time to review all you've learned about the grand themes of life. It's time enough to realize that every generalization stands opposed by a mosaic of exceptions and that the biggest truths are few indeed. Meanwhile, you feel the wind shift and the temperature change. You might simply decide to be present, and observe a few facts about the drifting clouds. Fishing in a place is a meditation on the rhythm of a tide, the arc of a year, and the seasons of life. To scratch the surface of those mysteries, for nearness to the beautiful, and to reassure that the world remains. To wash off some of the grief for the peace we so squander; to dip into that great and awesome pool of power that propels these epic migrations and to feel, and steal, a little of that energy. If you went through life refusing all the bait dangled in front of you, that would be no life at all. No changes would be made and you would have nothing to fight against and life would be as dull as ditchwater. 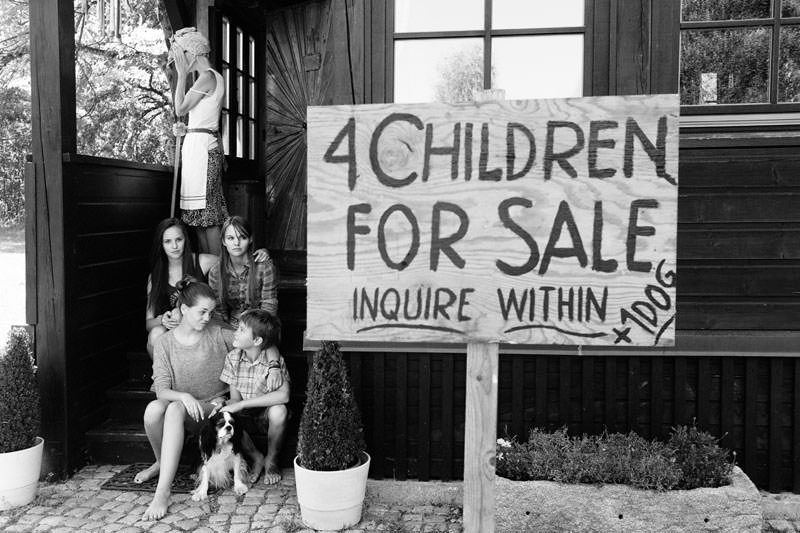 Through photographs, each family constructs a portrait-chronicle of itself; a portable kit of images that bears witness to its connectedness. Now they are on the auction block; a big '4 Children For Sale, Inquire Within' sign in a Chicago / Illinois yard mutely tells a family's tragic story. For long months the family waged a desperate but losing battle to keep food in the mouth and a roof over their heads. With no place to turn, they decide to sell their four children. The mother was shielding her eyes from the camera while her four small children stare wonderingly sitting huddled on the steps outside. Photographie à clef - this photograph is the remake of an infamous historical photo originally taken in 1948, that made its way into many U.S. newspapers. Redone to put a focus on the tragic case again because things have not changed that much. Human trafficking is still around in many countries and numerous children are still sold throughout the world. Many of them abused by child labor and kept in child slavery; not to mention sexual abuse and child prostitution. The little dog was not part of the original story but was added to the scenery to make its own, personal statement on animal cruelty. 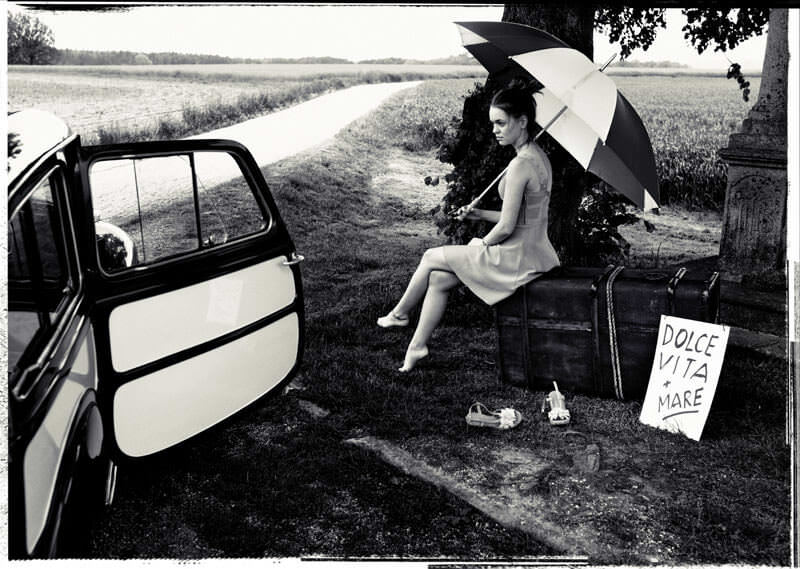 That which comes naturally is often magnified exponentially, for better or for worse, without us even realizing it. In her case, worse seemed to own most days. Waking to the taunting sneer of the sun as it celebrated freedom with a shining smile on its face, she rose from the bed on the wrong side as if to challenge the fates. Gathering up her effects, not in the least bit concerned of waking her lifeless companion or giving explanation, she stormed from the stale room, not quite big enough for two. Setting off to find a new adventure, keys in hand, she took to the open road with needs and no plan. Now she sits roadside, her thoughts as dark as her vixen eyes. No need to thumb a ride, she finds a spot in the shade and lets her curb appeal woo the right prey. The sultry breeze sticking angelic hairs to her damp neck only adding to her appeal. Seated on her case of secrets, waiting to catch the eye of the right passerby. After all, this case was not meant for leisurely spells. It was hard and heavy, not easy to carry. Often times she chose men and cars just because they could accommodate it, and avoided the same if they couldn't. Dragging it beneath the shade of the little car, she kicked off her shoes. Pulling things from within, unpacking her memories, all the things that she hides. The delicate pearl-gripped pistol she had never fired but kept anyway because it felt good in her hand. Mementos from cities where she could never return, pieces of her past that any smart woman would burn. She kept them all, tucked among silk and lace, her favorite, a dagger that had a special place. ~ Francesca 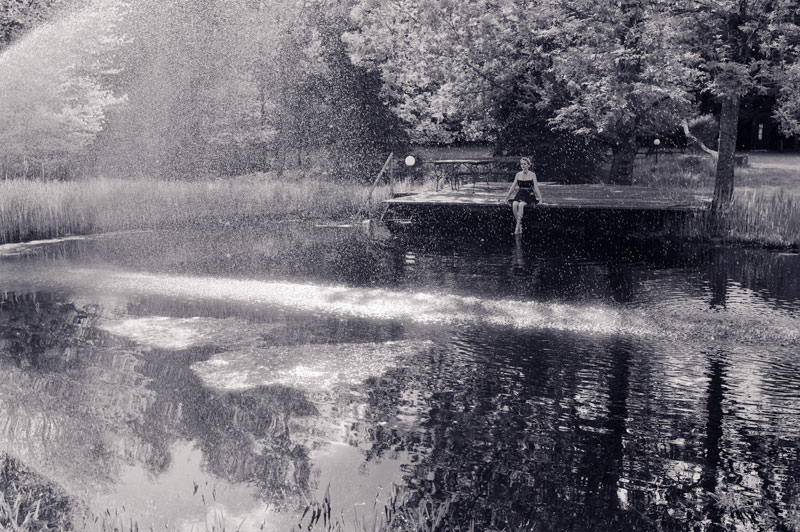 La Piscina | I like The Monologue Even More Than The Duet

I live in perpetual expectancy. You come and the time slips away in a dream. It is only when you go that I realize completely your presence. And then it is too late. You numb me. I am saying to myself: here is the first woman with whom I can be absolutely sincere. You could fool me, I wouldn't know it. I can't fool you; and yet I would like to. I can never be absolutely loyal, it's not in me. I love women, or life, too much, which it is, I don't know. I don't know what to expect of you, but it is something in the way of a miracle. I am going to demand everything of you, even the impossible because you encourage it. You are really strong. I even like your deceit, your treachery. It seems aristocratic to me. You make me happy to hold me undivided, to let me be the artist, and yet not forgo the man, the animal, the hungry, insatiable lover. No woman has ever granted me all the privileges I need but you - why you sing out so blithely, so boldly, with a laugh even - yes, you invite me to go ahead, be myself, venture anything. That is where you are regal, a woman extraordinary. I laugh to myself when I think of you. 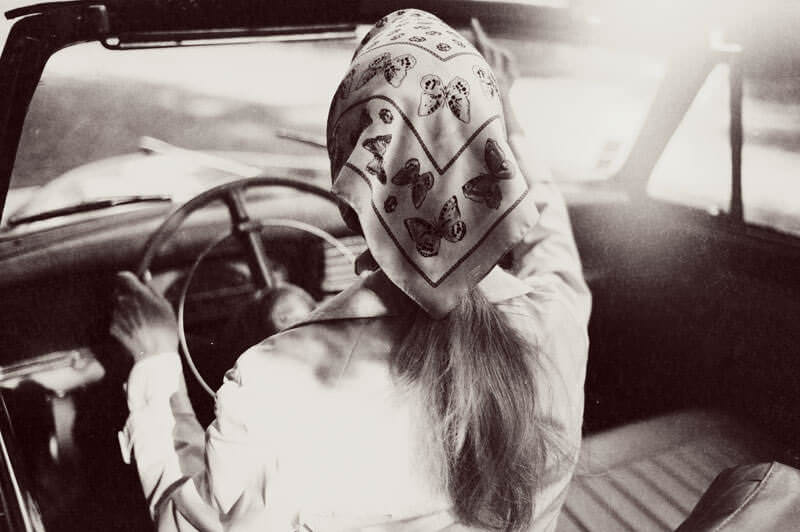 Cannes '62 | You Can't Tell The Hunters From The Hunted

Camera flashes everywhere. Photographers flushed out starlets, starlets stalked photographers. Of the celebrated tradition of little-known actresses posing for hordes of photographers, the hunt for attention becomes so fierce at Cannes that you can't tell the hunters from the hunted. Only Cannes is Cannes. In 1962 the role of the movie queen came naturally to Natalie Wood, who was at the top of her form. Photographers pursued Jane Mansfield like jackals, avidly focused on her two outstanding talents, but this year the town posted gendarmes to prevent all sorts of celebs from taking off their bikinis. How boring! Swiss made Ursula introduced herself as Honey Rider. And God created Brigitte Bardot who was cruising the beaches showcasing her new Riva boat. Italy's Sophia accompanied Austria's Romy who still was with France's Alain and playing pool games at Carlton's 'La Piscine'. Grace was lassoed and tamed by the last pirate of the Mediterranean Sea. Out of her, he made 'Grace On The Rocks'. I was after the face in the celebrated crowd, after that orchestral shot, when I spotted HER hubby's famous Peugeot in the Martinez's backyard where I hid like a black alley cat. Two packs of Gitanes later the chase went down the 'Boulevard de la Croisette'. She pushed the poor li'l car to the limits. My Facel Vega, stolen from Jule Dassin's 'Phaedra' movie set so Anthony had to ride a DB4 into the ocean to make Melina cry a river, hardly could team up. Finally, neither Paris Match nor LIFE liked my shots. The editors just laughed "Oh little boy, don't get fooled, Mrs. Columbo has never been seen, and probably never existed, it is just one 'Madame de Papillon'." - Well, boys, I know better! 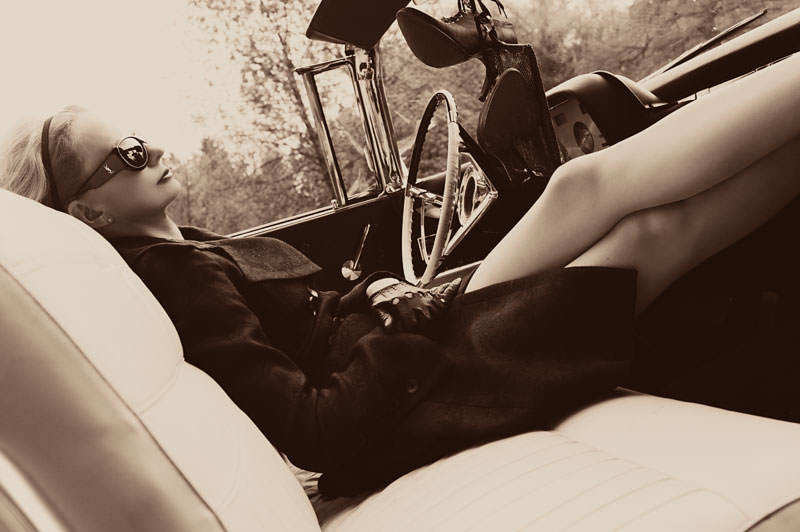 I drove all night and arrived at yesterday. Or could it be the day before? The daguerre'd past can grow foggy for a girl that does not check rear-view mirrors. Planning for this trip never occurred to me, so here I am pondering what I will do with this rare chance at rewriting my story. I knew it was a trip I would have to undertake, my heart would not have it any other way; this stubborn part of me that refuses defeat, that stays here, that refuses to leave, to fade. I feel him here in this place, a lingering phantom. Oh, I might say many things, but I very well may turn this car around and go find a new company. After all, we already tried this, didn't we? I think I will venture out on my own. Maybe there is something in yesterday that I missed the first time around. It would be a shame to waste this opportunity. Although, I would have to drive far to find a day that does not have his scent. I am not really sure if the road will ever lead away from him. I will not fight destiny, if I end up on his street, I will take love's gift to me. For now, I am laid back. I will stay in this moment and soak up yesterday's sun, feeling his revenant eyes on my bare thighs, our hearts on the run. ~ Francesca 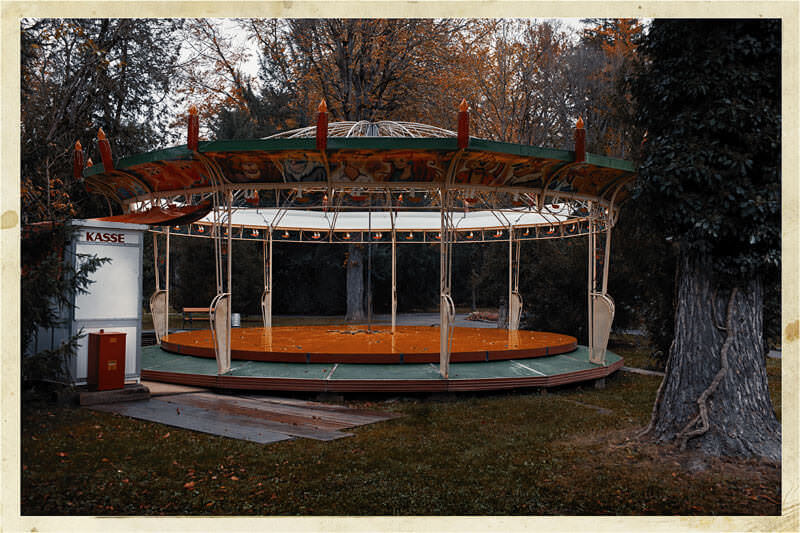 Hippodrome | They Shoot Horses, Don't They?

It is disturbing. Where did everyone go? Children, horses, parents milling around the perpetual motion of the carousel. The people watchers and the people pleasers; all distracted by the magical joy of the amusing park. The spinning of the carousel eases us into the lull of dreamlike wonder, the place of our memories represented by a ticket printed on cheap paper. When the movement finally stops, we are confronted with reality. The deconstruction of the fairytale whose age-old wisdom is revealed through the dissolution of the disillusion. Absent mothers, always protective, allow for risk-taking that might turn into emotional growth. The fragile little princess, through suffering, becomes an adult, strong woman. Life demands fulfillment of preconditioned roles. So the carousel can lead to emotional conditioning. Up's and down's, within predetermined patterns, are permitted, just don't jump off. The carousel offers no exit. Comply. Submit. Discipline, or existential boredom? Emptiness powers the jump, but knowledge gives the power of choice. At some point there was, or will be, a preprogrammed turn where inevitable shouts of joy cherish the dream of the moment where magic invades the little bodies. The ride becomes electrifying. From constancy and repetition, surrounded by the sound and lights, the hypnotic effect arises, and emotional dressing is gained. ~ Deise Lemos Almeida